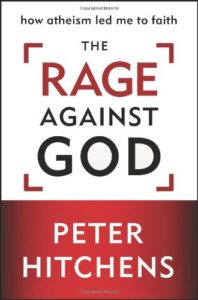 Opening up Peter Hitchens’ memoir, he is quick to use his years of BBC reporter experience to focus in on an objective:

I then intend to address the fundamental failures of three atheistic arguments. Namely, that conflicts fought in the name of religion are always about religion; that it is ultimately possible to know with confidence what is right and what is wrong without acknowledging the existence of God; and that atheist states are not actually atheist. (p. 11)

Of course, when attacking various worldviews like atheism or Christianity, there is a somewhat agreed upon list of the major objections – in Christianity, it’s probably:

It’s interesting that Hitchens chooses these three for atheism:

Are these the strongest objections to atheism? I know that many atheists find these objections invalid for various reasons.

On His Brother, Atheist Chrsitopher Hitchens

As he has become more certain about the non-existence of God, I have become more certain that we cannot know such a thing in the way that we know anything else, and so must choose whether to believe or not. I think it is better by far to believe. I do not seek to thunder as he does, or to answer fury with fury or scorn with scorn. I do not loathe atheists, as Christopher claims to loathe believers. I am not angered by the failure of atheists to see what appears obvious to me. I understand that they see differently.

Some interesting points here – I think I agree with Peter that so-called ‘hard atheism’ (“there is NO God”) is a declaration about something which we can’t know scientifically, any more than we can know God exists. It seems to come down to intuitive inference.

Although he often assumes that moral truths are self-evident, attributes purpose to the universe, and swerves dangerously round the problem of conscience—which surely cannot be conscience if he is right—he is astonishingly unable to grasp that these assumptions are problems for his argument. This inability closes his mind to a great part of the debate and so makes his atheist faith insuperable for as long as he himself chooses to accept it. (p. 12)

Ah, the problem of conscience, which surely can’t be conscience. Hmm. Again, I’m sure there are atheist responses to this ‘problem’ – I mean, isn’t there an answer to EVERY objection on all sides, and we are left to decide if it is credible?

On Getting Angry When Challenged

The difficulties of the anti-theists begin when they try to engage with anyone who does not agree with them, when their reaction is often a frustrated rage that the rest of us are so stupid. But what if that is not the problem? Their refusal to accept that others might be as intelligent as they, yet disagree, leads them into many snares.

I tend to sympathize with them. I too have been angry with opponents who required me to re-examine opinions I had embraced more through passion than through reason. I too have felt the unsettling lurch beneath my feet as the solid ground of my belief has shifted. (p. 12)

OK, so many of us are guilty of angry with being challenged, and probably for reasons of immaturity. But Hitchens is right, it is very alarming to have our deepest assumptions about life seriously challenged, and most of us, if we are honest, embrace our convictions “more through passion than through reason.”

On Belittling Ideas That Have Got Under Our Skin

I do not know whether they have also experienced what often follows—namely, a long self-deceiving attempt to ignore or belittle truths that would upset a position in which I had long been comfortable; (p. 12)

I guess that’s just a defense mechanism for us. But I am glad that the insistence of ideas against our deceptions can eventually come through – even if our deception turns out to be holding the correct position for the wrong reasons.

in some ways even worse, it was a position held by almost everyone I knew, liked, or respected—people who would be shocked and perhaps hostile, mocking, or contemptuous if I gave in to my own reason.

But I suspect that they have experienced this form of doubt, and I suspect that the hot and stinging techniques of their argument, the occasional profanity and the persistent impatience and scorn, are as useful to them as they once were to me in fending it off. And yet in the end, while it may have convinced others, my own use of such techniques did not convince me. (p. 12)

I think independence from our peer group’s “group think” is essential in developing our own convictions. May we all have the courage to set out on our own!