Why I Believed 03 – The Stress is Incredible 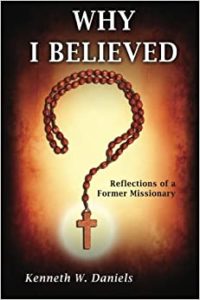 The struggle to leave your faith is one of the most heart rending, lonely, and sometimes frightening journeys any of us have to make. In fact, if ‘worldview shift’ were listed on the Holmes and Rahe stress scale, I bet it would be somewhere between ‘Personal injury or illness’ (53) and the most stressful event, divorce (100).

In his book, Kenneth Daniels talks about the choices a growing doubter actually has, none of them enviable. His choices reflect a family and spouse who still have faith:

So my options are limited: (a) abandon my family; (b) live with them in an uneasy, suspicious truce; (c) somehow will myself to believe again, even if Christianity appears untrue; or (d) attempt to instill in others an appreciation for, if not full acceptance of, the reasons for my unbelief. This book is my effort to undertake option (d), the others having proven unviable or unsatisfactory. (p. 4)

Ideas that helped me leave faith

One of the things which helped me abandon my unhealthy faith was the idea that if God existed, He was not fooled by my diplomacy in these matters. I no longer believed, and pretending only fooled my friends and my self. If God could see all, wouldn’t he be more likely to support my personal honesty? I mean, after all, being dishonest about it wasn’t changing the truth of my unbelief.

Third, the idea that sometimes, God Himself leads people on a strange journey away from their current limited understandings of Him. The story that most inspired me was that of Abraham, who was told to (a) head off in a direction without knowing his ultimate destination, and (b) be prepared to kill the thing that he valued most and received from God (his son Isaac). For me, I had to abandon the Pharisaical faith of my early experience to find a broader, healthier, more generous view of God.

An exciting journey, not just a dreadful change

Many of us who walk away have not done so out of a rebellious, juvenile whim, but rather out of a careful weighing of the reasons for and against our former faith. Our decision, far from being “sad,” as many of my friends and family perceive it, represents a move from unquestioning acceptance of tradition to a spirit of openness and adventure that pursues the evidence wherever it leads. We left in pursuit of truth. (p. 4)

It is very helpful to see the journey as one towards truth, not away from God. If God is true, I should presumably end up back at faith anyway (and in my case, that is what happened, though I had no assurance that it would).

Why so many different end points?

Yes, it is troubling and mysterious that some people, presumably on the same journey, end up atheist, while others end up agnostic or even believers of the same or a different sort.  But as M. Scott Peck says of the spiritual journey in my favorite book of his, Further Along the Road Less Traveled: The Unending Journey Towards Spiritual Growth:

By and large, I think it is good for us to be disillusioned. Generally, the more we are adjusted to reality, the better our lives work. But we can live in a world of reality only if we have a taste for mystery. for the reality of the situation is that our knowledge is like a little raft bobbing up and down in the sea of our ignorance, in an ocean of mystery. And people in that situation are out of luck if they don’t like the water. And the only way they are going to be in luck is if they love mystery, if they love to dive in it and swim in it and splash and drink it and taste it. (p. 76)

One of the most interesting interview series you will ever hear is Bill Moyer’s interview of Joseph Campbell (1904-1987), recorded in Joseph Campbell on Power of Myth With Bill Moyers. In this interview, as well as in his book The Hero with a Thousand Faces (Bollingen Series), Campbell discusses the journey of awakening and truth seeking we see in the larger than life myths of The Hero.

Among the 17 steps is the 5th, and the one many of us ‘leavers’ find ourselves in – the (unfortunately?) named “Belly of the Whale”

The belly of the whale represents the final separation from the hero’s known world and self. It is sometimes described as the person’s lowest point, but it is actually the point when the person is between or transitioning between worlds and selves.

You are not alone in this difficult transition

In this struggle I am not alone; millions of others have passed through the valley of the shadow of doubt, finding themselves unable to return to the pastures of faith, despite repeated appeals to God to restore their faith. We have prayed more times than we can count, “I do believe; help me overcome my unbelief!” (Mark 9:24) (p. 4)

I hasten to add that myself, and many others, including the great saints of old, *have* returned to the ‘pastures of faith’ after this tough time, but Daniels is correct – others never return.

While none of us can claim perfectly pure motivations, and we are often driven by or awakened by our hurts at the hands of the church or even our own parents, we should probably NOT buy into the ‘there is something wrong with me’ route, which just keeps us trapped in our dilemma. As Daniels remarks:

Many of us who walk away have not done so out of a rebellious, juvenile whim, but rather out of a careful weighing of the reasons for and against our former faith. Our decision, far from being “sad,” as many of my friends and family perceive it, represents a move from unquestioning acceptance of tradition to a spirit of openness and adventure that pursues the evidence wherever it leads. We left in pursuit of truth.

I am glad you are on the journey, and hope to be a helpful companion along the way. Stay with me as I blog through many other books on this subject, and please, get the books and read along!